A refreshing summer drink, the Pimm’s Cup has been around since the mid 19th century.  James Pimm owner of an Oyster Bar in London created the Pimms House Cup around 1840. Served in pewter tankards the cocktail was a combination of herbs, fruits and gin and sold as a digestif. The House Cup later became Pimm’s Cup No. 1.

There became 7 variations of the Pimm’s Cup, only differing by the base liquor. Only the vodka cup and brandy cup (now called Winter) remain in production with the original No. 1 cup still the most popular.

No. 2 Scotch Whiskey
No. 3 Brandy with the added flavors of orange and spice.
No. 4 Rum
No. 5 Rye Whiskey
No. 6 Vodka
No.  7 is pretty much “anything goes” from Absinthe to Tequila

Thanks to clever marketing, this British sensation is easy to find all over the world.

Fill a shaker with ice add Pimms, Domaine De Canton and lemon juice, give it a few good shakes.  Pour into a tall ice filled glass, top with club soda and garnish with lemon and cucumber. 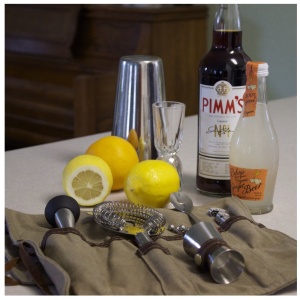 *We replaced the ginger ale with ginger beer and a squeeze of lemon. This is a fun cocktail to play with, so many possibilities!